The oldest surviving theatre in central Ohio and one of the oldest in the state, the Southern Theatre opened in 1896 as part of a performance space and hotel complex on the corner of High and Main Streets. The Southern was designed for the presentation of theatrical touring productions, and later also accommodated silent films, vaudeville, first and second run motion pictures, dance, country mu- sic reviews, and community events. Over its life, the Southern has hosted singer Lillian Russell, actors Ethel and Lionel Barrymore, Maude Adams, Sarah Bernhardt, dancers Anna Pavlova and Isadora Duncan, John Philip Sousa, Al Jolson, George M. Cohan, Mae West, and W.C. Fields.

After fire destroyed five downtown theatres between 1889 and 1893, an assembly of businessmen decided to enhance the city’s south side with a new and improved, fashionable hotel. Designed by the prominent local architectural fire of Dauben, Krumm, and Riebel, construction on the Great Southern Fireproof Hotel and Opera House began in 1894. 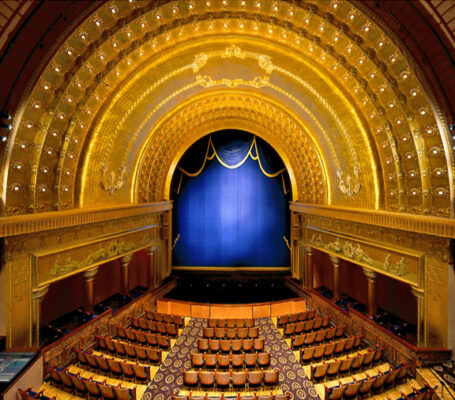 The Southern Theatre opened on September 21, 1896, and the hotel the following summer. Constructed of “fireproof” tile, brick, iron, steel, and concrete, the theatre – which originally seated 1,723 on three levels – was praised for its plush seats, stylish boxes, excellent sight lines, and absence of posts or other obstructions. Its ample stage dimensions proved more than up to the challenge of the 1903 touring production of BenHur, which featured a cast of 350 and a chariot race in which two teams of horses galloped on treadmills for a mile!

The Southern Theatre departed from the classical opera house by incorporating features considered very “modern” for its day. Most notable was the design of the audience chamber ceiling. From the proscenium opening, a series of concentric arches radiate into the house, creating an acoustic system that is still nearly perfect today.

The Southern Theatre was also one of the first commercial facilities in Columbus to use electricity. The six arches that fanned out over the orchestra were lined with light bulbs – 204 lamps in all! Tinted globes shaded the bulbs, giving the effect of warm, diffused light over the entire theatre. Ahead of its time, the building had to generate its own electricity and also produce its own water supply from three wells in the basement.

PARKING: The Southern Theatre is located at 21 East Main Street, at the corner of Main and High Streets in downtown Columbus. Parking is available at the Columbus Commons Parking Garage, directly across from the theatre.