What is Chamber Music?

Chamber music is a form of classical music that is composed for a small group of instruments—traditionally a group that could fit in a palace chamber or a large room.

Most broadly, it includes any art music that is performed by a small number of performers, with one performer to a part (in contrast to orchestral music, in which each string part is played by a number of performers). However, by convention, it usually does not include solo instrument performances.

Because of its intimate nature, chamber music has been described as “the music of friends”.  For more than 100 years, chamber music was played primarily by amateur musicians in their homes, and even today, when chamber music performance has migrated from the home to the concert hall, many musicians, amateur and professional, still play chamber music for their own pleasure. Playing chamber music requires special skills, both musical and social, that differ from the skills required for playing solo or symphonic works.

The most popular chamber music works are sonatas for piano and one other instrument such as violin or cello and string quartets. Most great composers have written such instrumental sonatas and quartets. … There are also a few works for ten instruments known by the French name dixtuor. 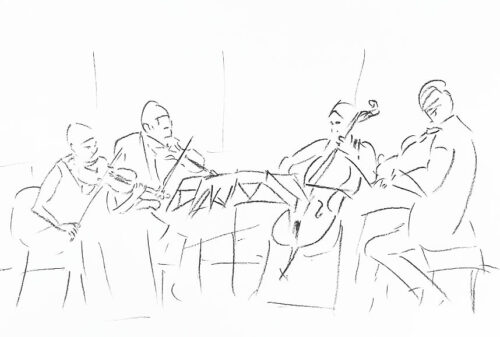 For a delightful and informative look at Chamber Music from the musicians perspective, take a look at a video prepared by Houston Public Media for National Chamber Music Month – May
What make Chamber Music different from other music? This video from the Chamber Music Society of Lincoln Center provides a wonderful and entertaining answer.
Back to top